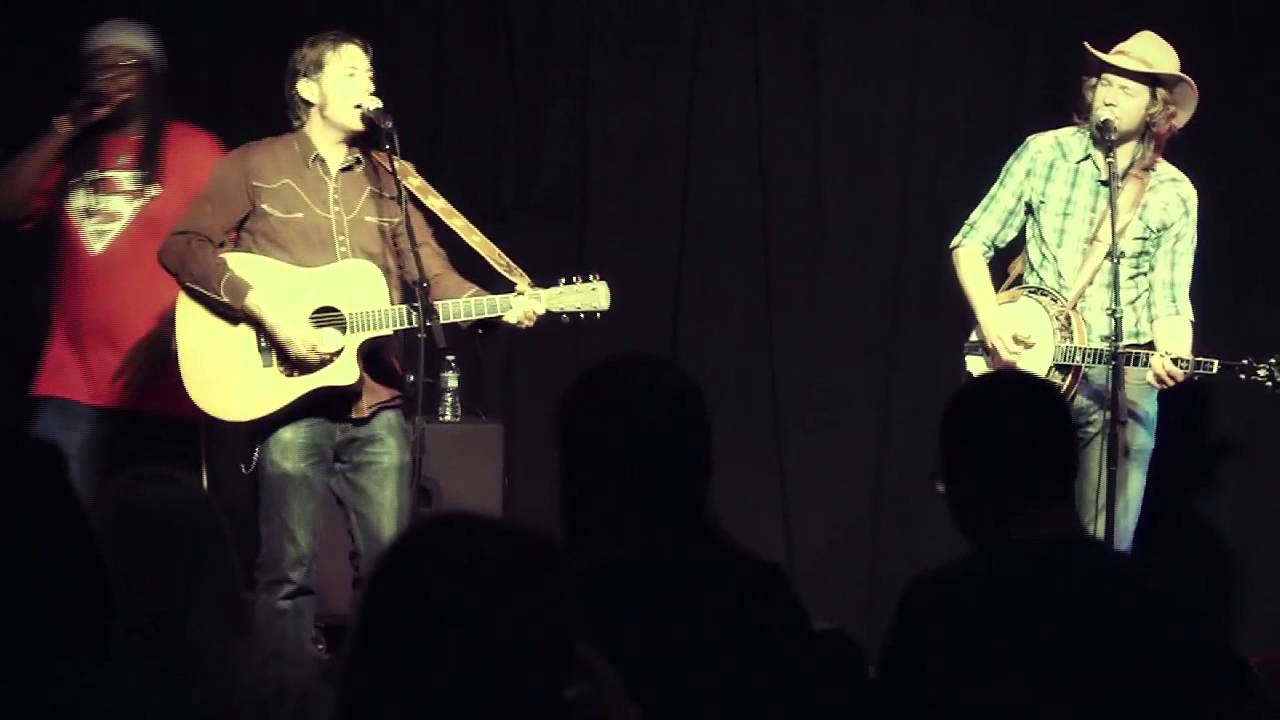 What do you get when you mix bluegrass with rap? Gangstagrass!  That’s what.  Check out Gunslining Rambler from their recent show at the Tralf in Buffalo, NY

R-Son The Voice of Reason: vocals

Blending bluegrass and hip-hop may not seem like a likely recipe for success. But don’t tell that to Rench, the mastermind behind the Emmy-nominated bluegrass/hip-hop outfit Gangstagrass.

Rench first came up with the concept back in grade school when he would breakdance on cardboard to RUN-DMC during recess, then go home and listen to his parents’ favorite country artists Johnny Cash and Willie Nelson on the stereo. Before long, he found common denominators between the two genres that were as obvious to him as grooves on vinyl.

Fortunately, that musical mash-up made a lasting impression on Rench, one that he finally put to good use years later after settling in Brooklyn. There he began to record MCs in his studio. Though the rappers may have thought their sessions were finished hip-hop tracks, Rench experimented with them afterwards, combining the vocal tracks with samples of bluegrass, blues, and electronic beats. The result was a genre-demolishing blitz called Rench Presents: Gangstagrass.

But it wasn’t until Rench made some of these tracks available as free downloads on the internet that things really began to take off. First came a positive mention from the influential blog BoingBoing.net—acclaim that earned Gangstagrass hundreds of thousands of downloads and an intense underground following. The country-urban buzz that was created eventually caught the ears of executives at FX Network, who liked what they heard and licensed a Gangstagrass track for a TV commercial introducing their new western crime series, Justified, starring Timothy Olyphant.

Eventually, they asked Rench to also create an original theme song for the show. Rench brought in top bluegrass session players to lay down an original bluegrass track for rapper T.O.N.E-z, the younger brother of early hip-hop legends Special K and T-LaRoc.

The rest is history. Justified became an instant hit and “Long Hard Times To Come” earned Gangstagrass an Emmy nomination for Outstanding Original Main Title Theme Music. It has opened every episode of the series since it premiered in March 2010. The same cast of musicians was later used to record the first official Gangstagrass album, Lightning On The Strings, Thunder On The Mic.

Based on the success of that album, FX licensed one of its songs, “Give It Up,” to promote the second season of the show. That exposure helped boost album sales, created tens of thousands of new Gangstagrass Facebook fans and set the stage for the band’s second effort Rappalachia. As Rench explains: “This record is a shout out to Appalachia, the cradle of bluegrass culture. It’s rooted in the sounds of traditional mountain music and presents Gangstagrass as a band with independent existence, not just one bound to a TV show.”

All told, Rappalachia has fortified both the hip-hop and bluegrass sides of the Gangstagrass equation, taking their music to a whole new level of intense urban twang. One that has spirited Rench and his gang of rappers to venues all over the globe.

Gangstagrass is back with a new album Broken Hearts and Stolen Money. Released on January 28th, 2014, the album’s 12 tracks serve as evidence that the crossroads have been repositioned north, where the dirt roads of Appalachian bluegrass meet the sooty city streets of Brooklyn. Broken Hearts and Stolen Money sees Gangstagrass delivering another innovative, hard-hitting, deeply soulful and always infectiously melodic record. Picking up where Rappalachia left off, the songs tackle the financial system’s breakdown, the take-it-or-leave-it, forward-stomping rambler’s plight, as well as their tried and true general badassery.