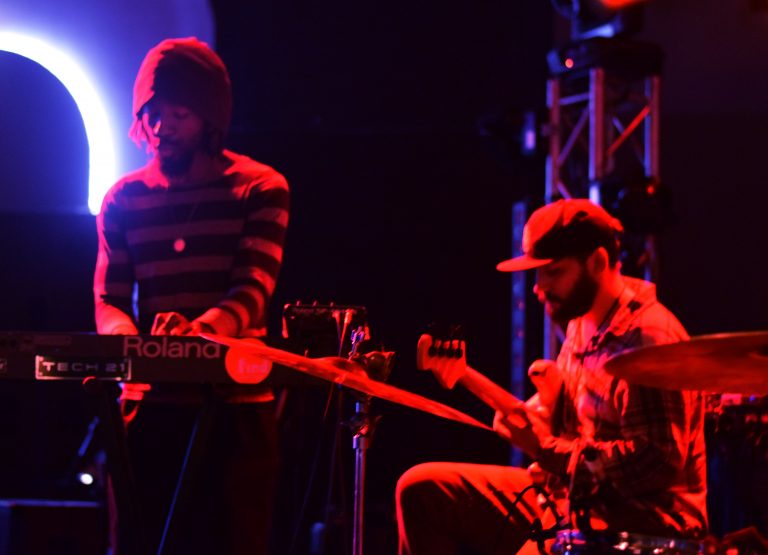 Touring in support of their latest album, Heatweaver, released in August through STS9’s 1320 Records, Jaw Gems were a superb opening act for Lettuce at The Tralf in Buffalo, NY on September 22.

Jaw Gems are a Portland, Maine-based quartet consisting of keyboardist Hassan Muhammad; drummer DJ Moore; bassist Andrew Scherzer; and keyboardist/sampler Tyler Quist. Learning that the band had been together since 2009, I immediately lamented having never heard Jaw Gems, but the ‘better late than never’ cliché certainly rings true here. These endowed, experimental producers/musicians exposed another facet of music with their unique sound and captivating live performance.

Jaw Gems skirt the lines between jazz, ambient hip-hop, and melancholy electronica. Bringing beat-music to a live setting, the band dances just around the beat while the ostinato hypnotizes the listener with a melodic crescendo that never soars beyond mellow. Classic synths lure you in with a vintage-like familiarity, reminiscent of renowned East Coast beat-makers such as Dilla and Prince Paul.

Simultaneously, the band creates a rhythmic tension, and utilizing the use of live drums and sample pads produces backbeats that mimic the cadence of softly lapping waves or the creaking of a moving swing. In fact, the way the group layers their sounds made me picture them playing their respective instruments on a seesaw, creating a continuous yet back-and-forth pulse. Their capacity was amazing, and the crowd was all over it.

As for Jaw Gems’ most recent album, part of Heatweaver’s allure comes from being recorded in a makeshift home studio, which seems to allow each track to evolve on its own, some of which have a very live feel. Crisp in production and ethereal in composition, Heatweavers seems intended to be heard amidst a mid-afternoon summer drive along the ocean shoreline as much as it is meant to be the sonic background for the remnants of a house party not quite ready to retire with the coming of a steel-grey dawn.

Jaw Gems’ blurring of genres works well in that the listener never feels they’ve been pegged—I imagine devotees of each school of thought (and undoubtedly several additional sub-schools) would presume the album to rest more so in their camp than the others, and it would be an interesting conversation to overhear different-minded listeners hash that out.

Whether your bag is 70s Eno, Smoke City, or Medeski, Martin and Wood, there’s something for everybody here.