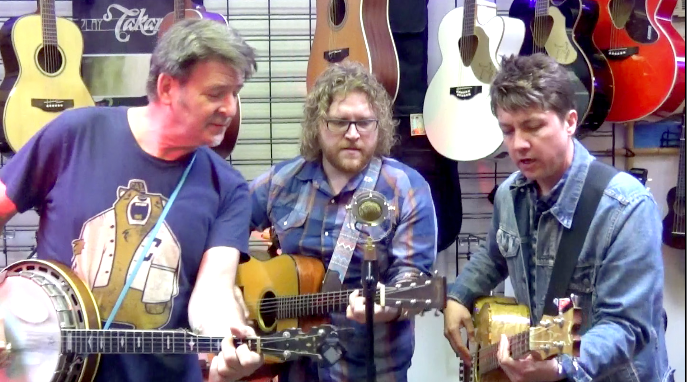 Here’s that last song from our recent Buffalo.fm session with Thor Platter recorded at MUSIC CITY BUFFALO
Check out Thor at https://www.facebook.com/ThorPlatterBand/ and follow his recently successful kickstarter campaign to fund his new album coming out this Fall…

Cleveland, Ohio, might not be an Americana mecca in the way cities such as Nashville and Austin are. But for singer-songwriter Thor Platter, being a working folk-roots musician in the gritty Rust Belt town affords him the kind of creative freedom few artists enjoy.

“That’s what’s nice about Americana–it encompasses many sounds and styles, from many different eras,” Platter says. “Above all, it should just be good music to your ears.”

The native western New Yorker grew up in a household where Woody Guthrie, early Bob Dylan and Flatt & Scruggs were staples on the record player. However, his older sister’s extensive collection of Neil Young albums–“More Neil Young than any person should have,” Platter says with a laugh–had the most impact on his future. “Young’s writing process, the way he lived his life, the way he recorded, not being that mainstream guy–that was a heavy influence on me,” he says. “I’ve never wanted to be a pop star.”

Like Young, Platter approaches his music and lyrics from the perspective of possibility. He’s not beholden to genre boundaries or commercial aspirations; instead, he’s driven by whatever his instincts tell him make sense. “I write out lyrics to create some sort of structure, but I’m not putting music to them right away,” he says. “I’m not forcing something to work if it doesn’t make sense. Then I have more freedom as to what style my songs evolve into–if I want to do them in a bluegrass style, or a more rock or blues thing, they fit.”

With such diverse output, it’s no wonder Platter made an immediate impact on Cleveland’s music scene upon moving there from Buffalo in 2008; in fact, in the years since, he’s been a featured performer at multiple large local music festivals and keeps a steady schedule of gigs within the region. However, with a band of ace musicians surrounding him–including bassist Paul Lewis, who’s toured nationally with country acts, and Paul Kovac, the Chardon Ohio Banjo expert–and plans for more new music in the works, Platter is poised to bring his music to bigger audiences, both near and far.