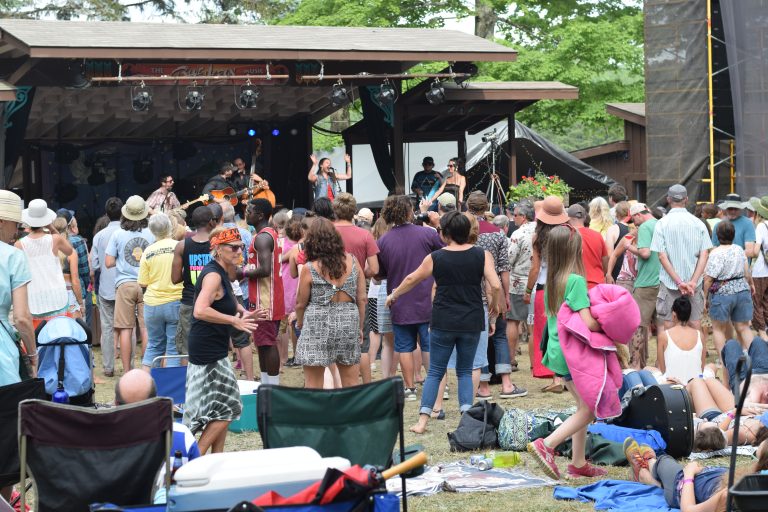 Through July 4th weekend, thousands of happy people hit the sprawling hills and woods of the land of The Heron, a retreat center and organic farm owned and operated by Steve and Julie Rockcastle, for the 25th annual Great Blue Heron Music Festival. The already beautiful grounds became a colorful sea of painted faces, bright clothing, and paisley tapestries; movement of hula-hoops and flow toys; and sounds of laughter and music, as people congregated after constructing their cozy weekend dens.

Friday’s festivities began with an endearing 25th anniversary parade before the Tiger Maple String Band cut the proverbial yellow ribbon with their main stage performance. A Heron staple, the old-time band played another set on Saturday. Amongst several other bands to pull double duty were bluegrass band Jakob’s Ferry Stragglers, who hit the main stage next. They later played a set in the woods at the Tiger Maple Stage that included a haunting cover of Bruce Springsteen’s “I’m on Fire,” which contained some exquisite banjo work.

This music got me to thinking about a simpler time, before Facebook and cell phones, when the only way to share music that wasn’t granted radio airtime was to travel and play at festivals. Although we have the best of both worlds (i.e. the ability to view video footage of live music), The Heron has always been a place for this music to be communally enjoyed. These two bands opening the main stage was, in retrospect, a sight of what the rest of the festival would include: authentic, extraordinarily played music.

Daybreak Radio kicked off music in the dance tent with a tight set, and Preach Freedom and Connect took the main stage over with their funky reggae grooves. Preach knows how to work a crowd and took the time to spread the love. Next up were Smackdab, who were raring to go for their first set of the weekend, then Jimkata, who always put on a great show.

Friday was already full of amazing music, and then The Horse Flies were up to close the main stage for the night. The way they keep time together with their stringed instruments is incredible. They did a dance tent set on Saturday that was equally energetic. Buffalo Zydeco had the dance tent warm and hopping on that winter-like evening for a few hours after, but the show didn’t run as late as usual in anticipation for Saturday.


Saturday at The Heron – just thinking about it makes me wish I were there (I’m not alone here). The vibe was even more immense than Friday, and the weather stayed great. Kids activities were abundant and included face painting, drumming, fishing, swimming, crafts, and tie-dyeing. There was always something to do if visiting a stage wasn’t where you or your kids wanted to be.

Things got started at 9 in the dance tent with Family Fun & Drum, and one-man-band-singer-songwriter Max Garcia Conover began his first set of the day at the Tiger Maple Stage. Holy crap, this man can play. If you heard him but didn’t see him, you’d be sure there was another person doing percussion, and maybe someone else playing guitar. He’s one you need to see with your own eyes, as his guitar technique is crazy. I can’t say I’ve seen it elsewhere before.

Addison Moon began music at the main stage, and it is always a pleasure to hear her big voice, that carried far and wide through the relatively quiet morning. Steve Johnson, formerly of Heron favorites Big Leg Emma, who called it quits last year, played with both The Probables and Band of Peace. In addition to their own music, it was really nice to hear some Big Leg Emma songs again.

Roots, rock, reggae band Mosaic Foundation are always a fun time in the dance tent, playing before Big Mean Sound Machine jammed out on the main stage. During a particularly stellar horn riff, my friend turned to me and said she had goose bumps. I held up my arm to show her mine. It wasn’t a result of cold; it was the music. BMSM, who have a new album in the works, have become one of my favorite live bands and it was nice to see them return to The Heron.

Celtic rockers The Town Pants, kilts and all, threw a great party all their own on the stage, and were followed by Grammy winner Jim Lauderdale. Hip-hop group The Gunpoets, who also played last year, reminded us to live peacefully through their high-energy performance.

After a great set from New Riders of the Purple Sage, many of whom played with Jerry Garcia and other members of The Dead early in their careers, Donna the Buffalo tore it up with their standard main stage closing set.

Meanwhile, in the dance tent, Heron first-timers Funktional Flow (Jeff Kuebler, guitar and vocals; Ben Whelan, bass; Joey Lewis guitar and vocals; Jim Edgar, drums; Matthew Lester, keys, sax, and vocals) showed just how excited they were to play, absolutely destroying their original set that included a first-class cover of Pink Floyd’s “Pigs.” The tent roared for them, and I can’t imagine they will be one-time players at The Heron.

It was Smackdab’s late night set that everyone was waiting for, as they were to unveil their secret covers. We happily learned they were going to be joined by Big Mean Sound Machine, and Robert Browning, Kyle Gustafson, Griffin Brady, and Faith Graham, to name a few, joined the band on stage as well. Mark Cooper gave up keys duty to sing The Clash’s “Rock the Casbah,” while Ryan Ecklund and Robert Browning rapped Dr. Dre’s “Nothin’ but a G Thang.” My personal favorite of the whole night was singer Jon Marc Johnson’s delivery of Peter Gabriel’s “Sledgehammer.” Matt Baxter and Daniel Witherspoon kept things melded with their guitar and drums, respectively, and although the night was cold, the dance tent was an inferno.

The night-lights were incredible. Glow sticks and necklaces, glowing wings and hats (and a very cool light-stick stick-figure costume) could be seen all over, but the woods held the best spectacles, as it gets so dark there at night the illumination is as necessary as it is pretty. However, the best I saw had to be the light display by the mermaid. This color-changing show included firefly lights and was just gorgeous. And a natural light show, the Heron sky was absolutely incredible.

While Sunday is naturally a chill day, with many patrons packing up and heading home, the music begins earlier and is still just as rocking as on Friday and Saturday. The Songwriters’ Circle is always a pleasant start to the day, and Ezekiel’s Wheel Gospel music could be heard playing in the dance tent. Mulberry Soul was up early after their late-night set in the woods for a mid-noon main stage jam, while Ken Hardley & The Moose Club woke up the woods.

Black Rock Zydeco, a Stewed Mulligan square dance set, and The Derek Davis Band closed out the dance tent while Cindy Love and friends and The Probables wrapped things up in the woods. Plastic Nebraska had things bumping at the main stage with their second set of the weekend, before all music turned to the main stage for The Sun King Warriors, Driftwood, and Donna the Buffalo.

Jim Donovan is no stranger to The Heron, having played numerous times there in the past with Rusted Root and facilitating the ever-popular drum circles. Doing a wonderful set of originals and some Root songs, Jim Donovan and The Sun King Warriors (percussionists Bryan Fazio and Harry Pepper, bassist Kent Tonkin, and guitarists Dan Murphy and Kevin McDonald) got everyone up and moving. Donovan has quite the charisma for someone used to being in the back of the band, and The Sun King Warriors are clearly very talented and passionate musicians, switching instruments for Donovan’s stint on the drums. Donovan’s daughter, Tupelo, sang a charming rendition of Rusted Root classic “Send Me On My Way,” and the audience loved it.

Driftwood was up next, and more than a few folks made it a point to stick around for their set. Made of Dan Forsyth (guitar, vocals); Joe Kollar (banjo, guitar, percussion); Claire Byrne (violin, vocals); and Joey Arcuri (upright bass, vocals), this quartet plays some fierce strings and sings some striking harmonies. If anyone was tired at this point, they were not after this set.

For the last set of the festival, Donna the Buffalo brought up Driftwood and many others to join them on stage for their improvisational goodness. Also celebrating their 25th year at The Heron, they played with just as much enthusiasm as they did for their intense Saturday night set. Donna the Buffalo is Jeb Puryear (vocals, electric guitar) and Tara Nevins (vocals, guitar, fiddle, accordion, scrubboard) joined by David McCracken (Hammond organ, Honer Clavinet & piano), Kyle Spark (bass), and Mark Raudabaugh (drums). It’s not just their music that you feel; their lyrics really resonate and they combine to make some beautiful music that continues to enthrall fans both old and new. The Heron wouldn’t be the same without Donna the Buffalo closing the festival.

The best part of the weekend, though, was seeing family and meeting new members. You can really feel the love in The Heron community, and it’s what has kept this festival going for the past 25 years. Festival promoter Dave Tidquist says of the future: “Only time will tell, we just hope to keep having a great time and to continue sharing the best local and national talent here at The Heron for many years to come.” With a heartfelt thank-you to everyone who worked tirelessly to make the 25th anniversary celebration so special, we look forward to year 26!

Up next on The Heron land: