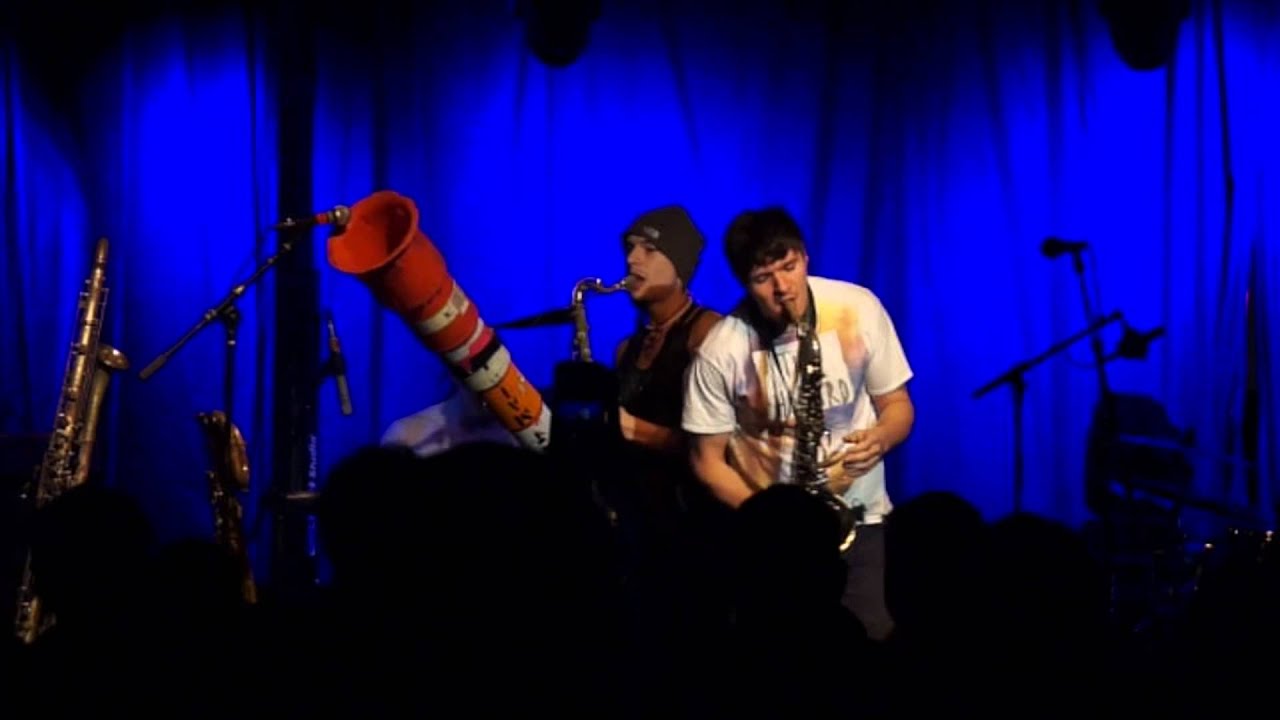 If any band is a poster child for turning the power of positive thoughts and intention into reality, it’s the explosive horn-and-percussion trio Moon Hooch. In just a few short years, the group—Wilbur, fellow horn player Wenzl McGowen, and drummer James Muschler—has gone from playing on New York City subway platforms to touring with the likes of Beats Antique, They Might Be Giants, and Lotus, as well as selling out their own headline shows in major venues around the country. On ‘Red Sky,’ their third and most adventurous album to date, the band uses everything they’ve learned from their whirlwind journey to push their sound to new heights, bringing together the raw, transcendent energy of their live performances and the sleek sophistication of their studio work into a singular, intoxicating brew that blends elements of virtuosic jazz, groovy funk, and pulse-pounding electronic dance music.

“I think ‘Red Sky’ is more focused than any of our past albums,” reflects McGowen. “We practice meditation and yoga, and I think that we’re more evolved as people than we’ve ever been right now. That evolution expresses itself as focus, and through focus comes our energy.”It was two years ago that the band released ‘This Is Cave Music,’ an exhilarating thrill ride that earned rave reviews from critics and fans alike. NPR hailed it as “unhinged” and “irresistible,” praising each musician’s “remarkable abilities” and naming their Tiny Desk Concert one of the best in the prestigious series’ history. The album followed their 2013 debut, which had Relix swooning for their “deep bass lines, catchy melodies and pounding rhythms,” while the Wall Street Journal celebrated their “electronic house music mixed with brawny saxophone riffs.” Though the band—whose members initially met as students at the New School—turned heads in the music industry as relative unknowns with a charismatic, unconventional sound (they play with unique tonguing techniques and utilize found objects like traffic cones attached to the bells of their horns to manipulate tone, for instance), they were already a familiar and beloved sight to straphangers in New York, who would react with such joy and fervor to their impromptu subway platform sets that the NYPD had to ban them from locations that couldn’t handle the crowds. NY Mag once referred to their sound as “Jay Gatsby on ecstasy,” while the NY Post fell for their “catchy melodic hooks and funky rhythms,” saying they had “the power to make you secretly wish that the short [subway] wait becomes an indefinite delay.”

While the band’s busking days are behind them now, the lessons they learned from all those platform parties helped guide their approach to recording ‘Red Sky.’

Recorded at The Bunker studio in Brooklyn, ‘Red Sky’ is nothing if not captivating. The album opens with the tribal urgency of the title track and proceeds, over the next 45 minutes, to utterly demolish any and every possible barrier that could stand between your ass and the dance floor. On ‘Shot,’ Wilbur sings a stream of consciousness vocal line over an airtight groove, while “Psychotubes” channels the apocalyptic fire and brimstone of death metal, and the staccato intro of “That’s What They Say” gives way to a gritty, late-night come-on of a saxophone line that’s far more suggestive than any whispered words ever could be.

Though the band is heavily inspired by electronic music, they made a conscious effort to use as little in the way of “studio tricks” as possible on ‘Red Sky,’ aiming instead to capture the sound of their live show, which has evolved significantly from their days underground.

“When we were playing in the subways, we were playing entirely acoustic,” explains Wilbur. “It was just two saxes and a drum set. Then Wenzl acquired a baritone sax and we all started getting into music production and incorporating electronic music into our live shows.”

At their performances, the band now plays through what they call a Reverse DJ setup, in which the live sound from their horns runs through Ableton software on their laptops to process recorded effects onto the output. In addition, to flesh out their sound on the road, the band began utilizing Moog synthesizers, an EWI (an electronic wind instrument that responds to breath in addition to touch), and other more traditional instruments like clarinets. Wilbur added vocals to his repertoire on some tracks (something the subway never allowed him to do), and Muschler, meanwhile, traveled halfway around the world to expand his percussion skills.

“I went to India, and the first morning I woke up, it was like 5am, and I followed this music along the banks of the Ganges,” he remembers. “I eventually ended up finding this amazing tabla player, and after his performance, I asked him for lessons. He agreed, and I went for daily lessons with him and another guy for the next two weeks. After that, I took a train to Calcutta, where I met with the guru that I’d studied with in New York, and I did morning lessons with him and practiced throughout the day. It was an incredible musical immersion experience.”

The band members all speak reverently of meditation and consciousness and the role it plays in their music (McGowen believes his introduction to it, spurred on in part by Wilbur and Muschler, saved his life), but equally close to their hearts are the environmental causes they champion. Moon Hooch tries to live up to their green ideals while traveling as much as possible, playing benefit shows, supporting local farmers and co-ops, participating in river cleanups, filming informative videos for their fans, and more. The band even runs a food blog, Cooking In The Cave, in which they highlight the healthy, sustainable, organic recipes they utilize with their mobile kitchen setup on tour.

For the members of Moon Hooch, commitments to consciousness and environmentalism and veganism and philosophy and peace aren’t separate from their commitment to music, but actually integral parts of it. It’s all tied into that same core approach that led to their discovery on the subway platform: try, even if it’s just a little bit every day, even if it’s just with the power of your mind, to make the world less like it is and more like you wish it could be.

“I’d say all of our songs express the essence of that kind of energy,” concludes McGowen, “because before you can even think any thoughts, there exists the energy that drives those thoughts, and that energy is intention. I feel like we’re putting the intention of positive change constantly into our music. While we’re playing, I often see the future emerging: skyscrapers getting covered in plants, frowns turning into smiles, fistfights into hugs. I can see the energy of love and collaboration and trust replace the energy of fear, hatred and violence.”

It’s an ambitious vision, to be sure, but considering the band’s track record at turning their thoughts and dreams into action and reality, perhaps it’s only a matter of time. 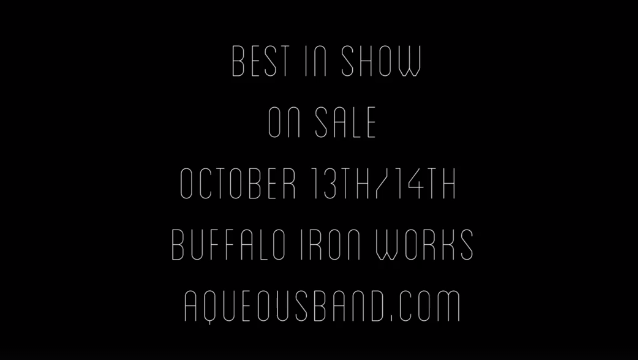 The Making of Aqueous’s New EP “Best in Show”