All Good Music Festival and Campout: The Good, The Not-As-Good, and the Best

The All Good Music Festival and Campout can now celebrate the success of its 18th year. Held July 9-11 at the Berry Hill Farm in Summit Point, WV, Walther Productions delivered on nearly every expectation that surrounded the All Good experience.

After driving nearly 7 hours from Buffalo, NY, getting to Berry Hill Farm involved travelling through stunning farmland. Rows of corn, apple orchards, or fields holding large, gorgeous farmhouses bordered the road, providing a calm and rustic air. It was an enjoyable visual not often encountered en route to a festival, one I felt to be a good sign.

As the first thing is always setting up house, I was quite pleased to see a strategic car-camping area. Complete with street signs and neighborhoods named after female writers, the act of locating was the easiest I’ve come across at a festival. Bathrooms, vendors, ice, etc. were all a few minutes walk.

We set up shop quickly to get to the stage for Twiddle, but not quite fast enough for the predicted rain that came roaring through with stern winds, causing many to reset camps. Otherwise the weather was sunny and hot. Luckily, we made it in for the last part of the set, because Twiddle is just amazing, but what was also impressive was the Concert Bowl I’d been very curious about.

Upon walking through the venue’s Pagoda entrance and passing security, the grass opened up and it was literally like being in a bowl, but surrounded by awesomeness: food, drink, and cool-stuff vendors on either side of two stages; a free water station; secluded restroom areas; a giant tent with hammocks; a giant, glowing Buddha statue surrounded by stairs; all with a panoramic view of the mountains as a backdrop. All Good’s Concert Bowl could easily fit in a seasoned viewer’s top list of venues.

Disclaimer: these are suggestions at nearly every venue and as such are necessary to mention. Firstly, having more portable restrooms around the camping grounds is self-explanatory. Secondly, entry/reentry took way too long due to the scanning of bracelets and rigorous security checks, both of which seemed unnecessary. At the end of the day, though, these were minor inconveniences and if they were the biggest complaints, I’d say that everything went pretty damn well. Now onto the music:

So we only got a little of Twiddle, but the adjacent stage had Cabinet ready to go the second Twiddle finished their set. Cabinet are a group that I have come to thoroughly enjoy these past couple of years. String-heavy and obvious of folk and country roots, their music is highly energetic and danceable and pulls influence from all over the place. I even heard a bit of reggae mixed in there, which tells the truth of their talent. It was a privilege to hear their two sets and stint with the Everyone Orchestra (later). 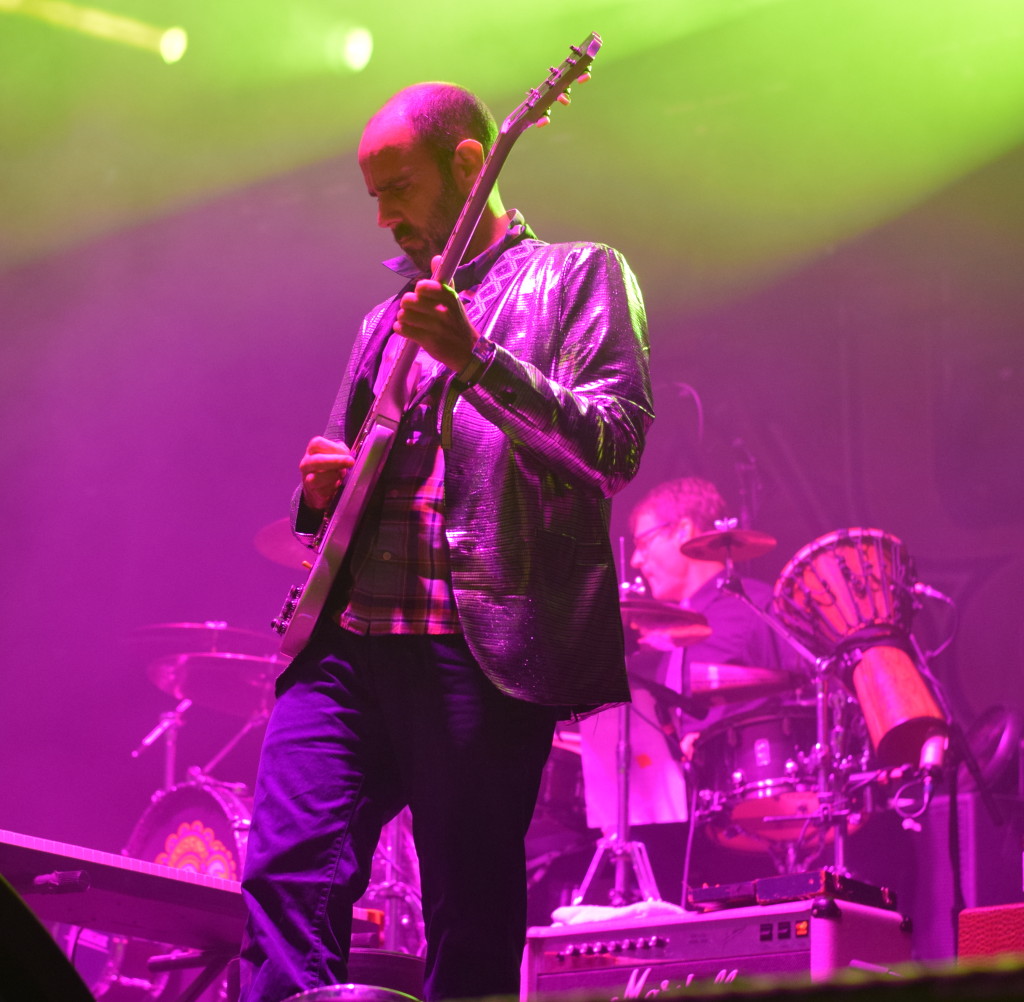 Thursday night’s headliner was moe., who played a classic set. Especially appropriate as they continue to celebrate their 25th anniversary, fan favorites included “Wormwood,” “Okayalright,” and “Spine of a Dog,” and going way back, a closure of “Akimbo.” Their stellar performance was a reminder of why they not only continue to rock fans’ worlds, but also gain new ones.

I was introduced to Greensky Bluegrass and was quite intrigued by the witty and fast fingers of this all-string quintet. They also had the best cover of the festival with Dire Straits’ “Money for Nothing.”

I had heard a few songs from STS9 and missed their show in my hometown the night before, as I knew I’d be seeing them at All Good. A friend who had attended informed me that I was in for a treat. An all-you-can-eat sundae buffet, complete with pistachio ice cream, Snickers ice cream bars, and real whipped cream might have been a more accurate description. Their live electronica was so good it felt that indulgent. But STS9 didn’t give me a food baby so next time that hunger hits, I’m going to listen to them in lieu of ice cream.

Friday’s music began at 10:30 at the Believe in Music Stage near the campgrounds, and Big Something was by far one of the best alarm clocks I’ve ever had. I wanted to venture down, but had to prepare for a long day of music before hitting the main stages.

Turkuaz have become one of my favorite bands this past year. Picking from their wide span of music from the first record to the newest, Turkuaz’s fierce playing made it hard for the crowd to stay cool in the afternoon sun. It was impossible not to dance as the nine of them seamlessly blended or omitted their voices, horns, keys, guitars, and rhythm section, as needed. Playing favorites such as “Chatte Lunatique” and “Bubba Slide,” Turkuaz also threw in some tunes from their new release coming out in the fall, as well as a kicking cover of “Feelin’ Alright.” 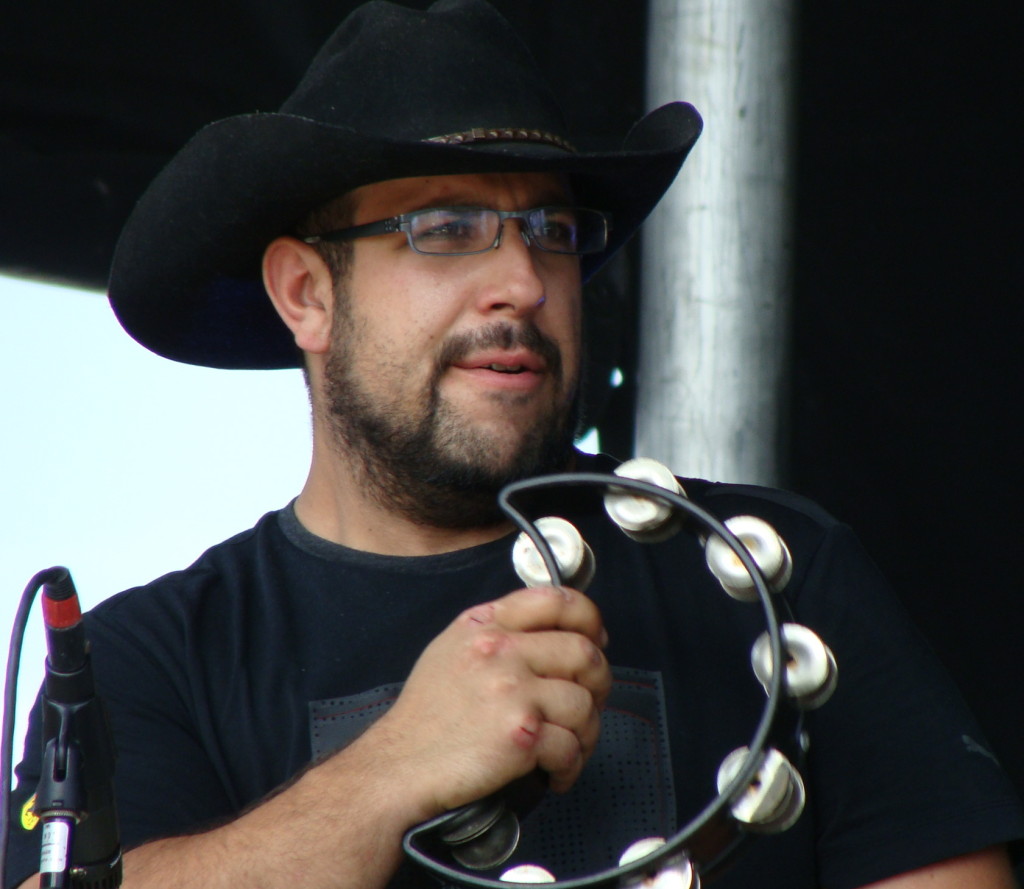 One of the most creative things about EO is that when they hit the stage there’s always a new roster; you could see EO 100 times and it’s like the first time, every time. With zero rehearsal, every bit is composed and created on the fly. Many of this group had never met one another, let alone having ever played music together. Yet while loping about the stage, Matt Butler skillfully guided the group with a queue board and hand gestures, initiating time signature changes and instrumental breaks and inducing vocals from the band as well as the crowd. What Butler was able to coax out of an utter mishmash of fearless talent is the epitome of unique. 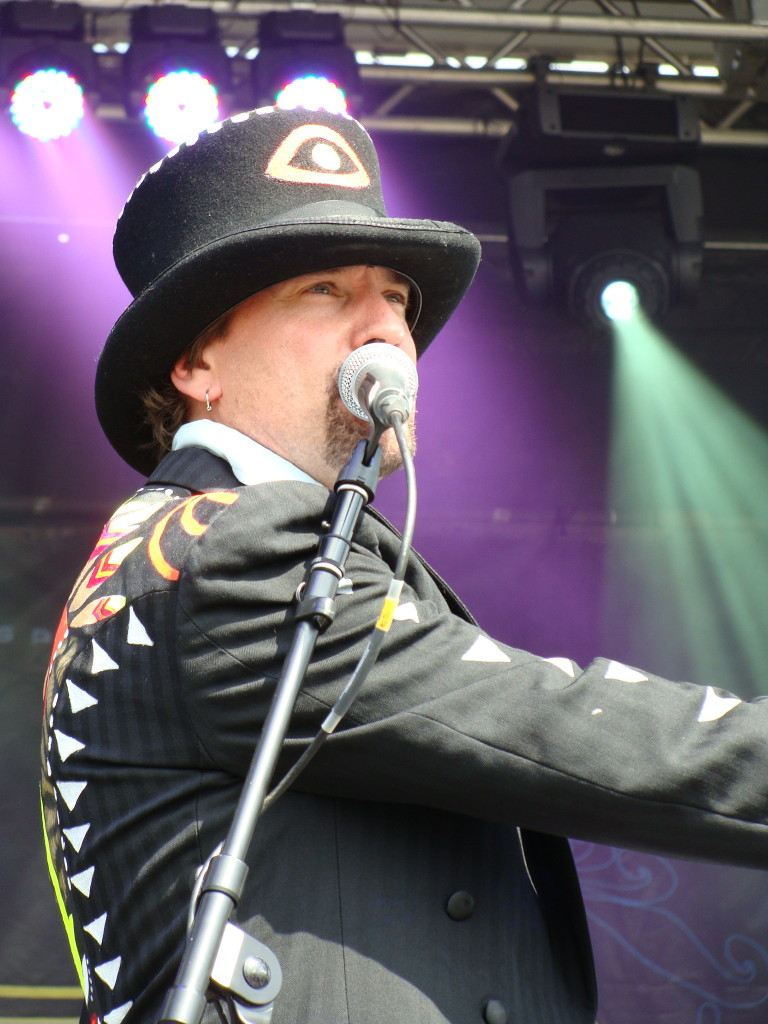 My favorite part of the performance was when Butler asked Pappy Biondo to begin playing and the band would just see where it went from there. What started off as a banjo solo turned into a sensual, bluesy jam session. You never knew what you were going to hear next, as layers of sound were added in and changed throughout. Of the best performances, as always.

Chris Robinson Brotherhood took the stage and gave us a healthy dose of blues-rock before Railroad Earth (who I like to call Railroad Earthquake) hit the audience like a steel freight train. Of all the bands I hadn’t heard before, Joe Russo’s Almost Dead won the top prize. The way they arrange The Grateful Dead’s music is supernatural.

When it came time for Primus, there were so many people we wondered where the hell they’d all been for the last 24 hours. There were giant inflated ‘shrooms, absolute insanity viewable on the screen, and a pig mask (the latter two legitimately creeping people out), but no theatrics could take your eyes away from Mr. Claypool and Primus as they hammered out a disturbingly phenomenal set. Engaging the audience with humorous anecdotes took away from the aberration of a Primus show, as did the pure musical genius. Each song was played tightly and fervently, but “Over the Falls” had me standing with my jaw dropped and likely drooling. And that electric upright bass played with a bow was a knockout. Yes, Primus sucks.

After Primus’ mind coil, Lettuce’s vibrant dance vibes were happily welcomed with flailing arms and legs. A band I’d wanted to see for some time now, they exceeded my high expectations.

When it came time for Thievery Corporation though, I planned on the pure surprise. I didn’t know what I was going to get, but I cannot wait to see this band again. They are a magnetic combination and include elements of Indian, Middle Eastern, and electronica, to name a few. Doing some Dead covers, their interpretation of “Fire on the Mountain” had a funky reggae vibe that the entire audience was into. I was either dancing or just standing, mesmerized and in awe of the sensory experience. Thievery Corporation are by far one of the best bands I’ve ever seen perform, and Friday night could not have ended more phenomenally.

Saturday’s music for me was heaviest. From 5 p.m. until 3 a.m., there was no place to be except in the Concert Bowl, and quite honestly, I’d have stayed there the whole day if I could have handled more than a ten-hour stretch. TAUK was the first band I saw, who went on at noon and played a massive hour-long set of moody, yet danceable, rock instrumentals. TAUK’s rendition of The Beatles’ “Eleanor Rigby” was a welcomed choice. 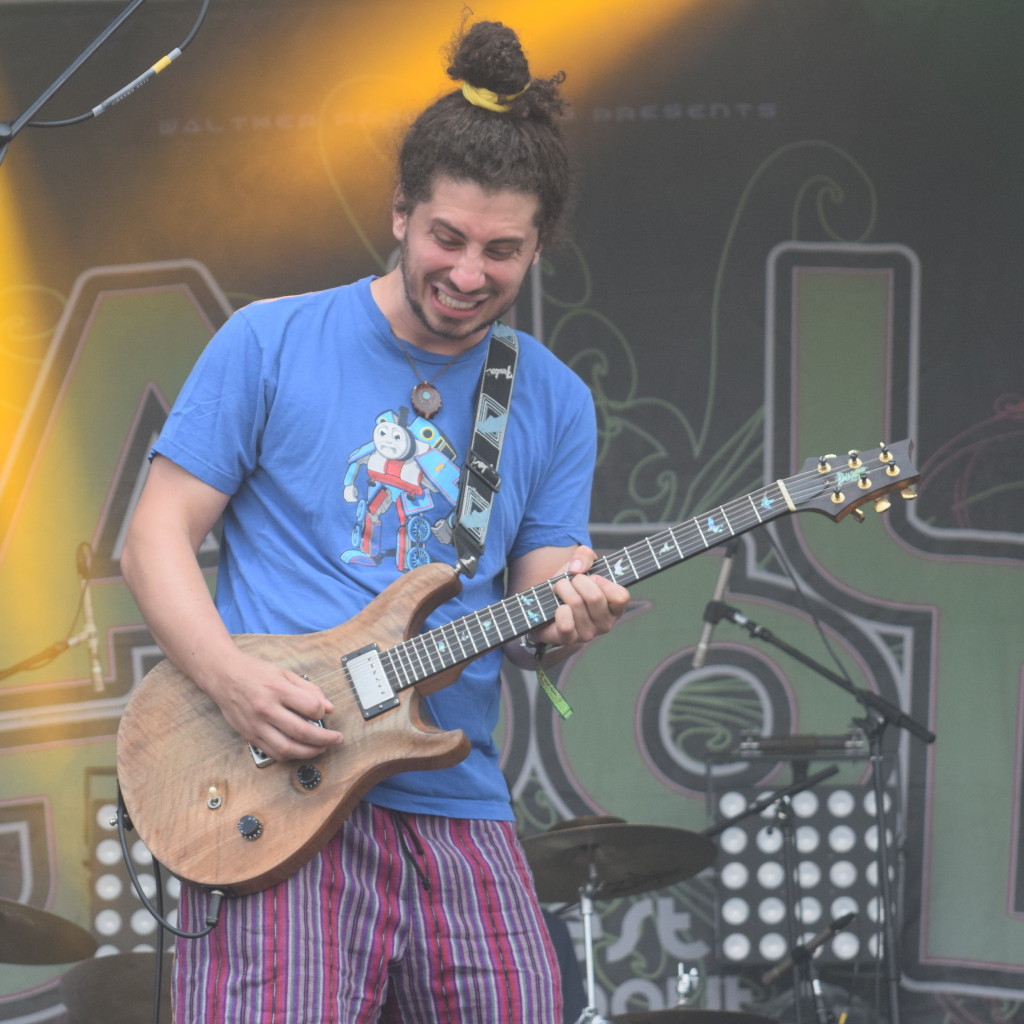 Pigeons Playing Ping Pong followed with a wicked set, sharing their infectious energy with the crowd in the hot afternoon sun. I’m going to quote Digital Underground here, because “crazy whack funky” is an accurate descriptor for PPPP’s live show. Memorable moments were “F.U.” and a “Julia” < “Under the Sea” < “Julia.” Yeah, from the The Little Mermaid. I can’t think of another band that could pull that one off.

JJ Grey & Mofro…I could not get enough of this man’s voice. Mofro’s musical dexterity…I could listen to them play all day and through the night. Most extraordinary was how they were able to take the listener through the gamut of sentiments. They made you literally feel the music: some songs made you question life, feel grateful and happy, want to get it on, or feel everything and just dance. Grey’s stage presence, particularly when he talked to the audience, (with that freaking voice) assisted, and they are on my ballot for top performance at All Good. Absolutely outstanding.

There is a reason that this was not Yonder Mountain String Band’s first appearance at All Good. Their amalgamation of classic bluegrass strings improvises and creates new things at each live show, a euphonic experience at its best.

SOJA followed with their authentic and modern reggae, and the crowd loved them. Another large band, they kept everyone amused and dancing.

Always wearing a smile, Keller Williams is one happy guy. It was amazing to watch him create all that music by himself and absolutely love doing it, and his performance was nothing shy of superb. 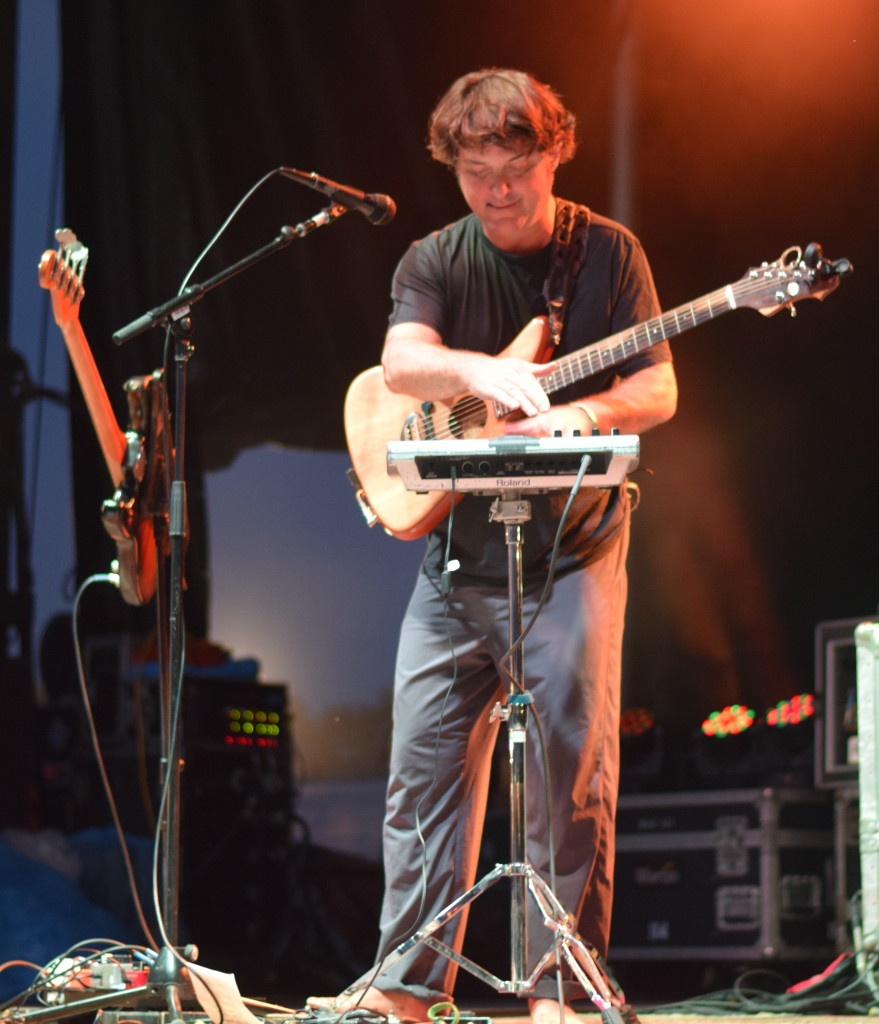 Saturday’s headliner CAKE’s set was huge and included “Short Skirt, Long Jacket,” “Love You Madly,” and of course, “The Distance.” While a downer to many, John McCrea’s five-minute diatribe was more a sarcastic lament over the ills of our world (hostility over peace, escapism over intelligence, technology over being in the moment) than a condescending lesson to a dumb audience. I don’t care, CAKE will always be angst-laden, ’90s geek rock superheroes.

A week after the Fare Thee Well shows in Chicago, fans were naturally still reveling in The Grateful Dead’s 50-year legacy of music and culture. Dark Star Orchestra fittingly culminated the weekend’s Dead tributes with a great set that included “China Cat Sunflower” and a strapping “St. Stephen > “The Other One”> “St. Stephen.” A change from the usual, the “White Rabbit” ending was definitely a beloved moment. DSO is unquestionably at the top of the Dead tribute bands list.

At the end of the night, especially for a festival’s last performance, there’s no group like Lotus to fit the bill. Lotus had an enchanting way of culminating the weekend’s music into one final blow. With hints of ambient trance, funk, and a little of everything else, Lotus’ instrumentals sucked you right into the music. They of course kept us dancing but also played the lovely melodic “Spaghetti,” which helped to wind down an unparalleled festival.

As you would expect from a festival such as All Good, there was not a single band there that played a less-than-stellar set of music. I could not attend nor write about every performance, but those I missed are all on my radar. Thank you, All Good, for making this one of the best. 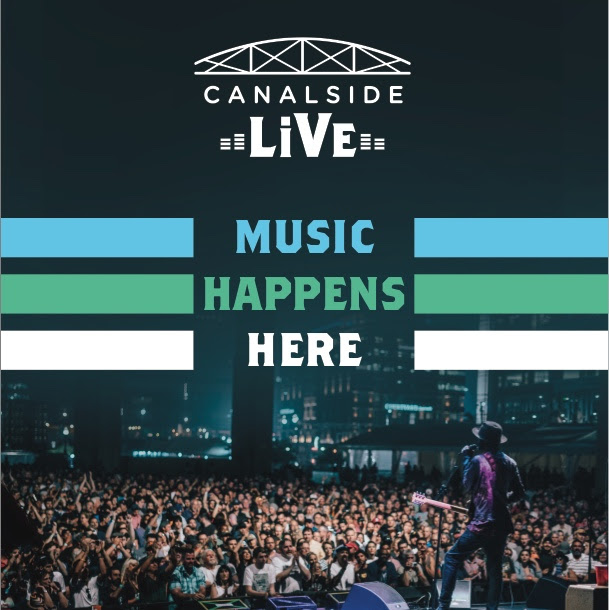