For more than a decade pianist Marco Benevento has been amassing an extensive resume of composition and collaboration. His albums set forth a vision that connects the dots between MGMT and Tortoise on one side, Brian Eno and Brad Mehldau on the other. In the live setting, his performances reverberate with pulsating dance rock energy, which has led to numerous high profile appearances, ranging from Carnegie Hall to Celebrate Brooklyn, Newport Jazz to Bonnaroo. Benevento has been invited to open for The Books, Ben Folds and Rubblebucket, while headlining shows from coast to coast.

Special Guests: And The Kids:

Recently called one of “the Western Mass. indie scene’s brightest creative lights” by Pitchfork, Northampton, Massachusetts’ And The Kids recently released their debut full-length album, Turn to Each Other (Signature Sounds). Turn to Each Other is more than an album title: it’s a statement of fact for the band, whose bond — as musicians, friends and creative foils — is as tight as they come. The album features 11 tracks full of ringing guitars from Hannah Mohan, knotty rhythms from drummer Rebecca Lasaponaro and bold accents from synthesizers and percussion by Megan Miller. Together, they create “apocaplyptic pop”, a dizzying stop-start ride with lush, intricate soundscapes that frame Mohan’s lively lead vocals. NPR Music recently raved, “Guitarist Hannah Mohan’s striking vocals rival the vibrato and boldness of Siouxsie Sioux… [And The Kids] make music that’s both fearless and entertaining.”

Watch video above from his last show at Buffalo Iron Works 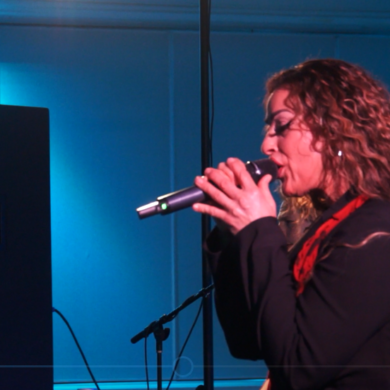