When Kiefer Sutherland rolls though Buffalo Iron Works this Monday night, It will be as himself and not one of the many celebrated acting roles he’s played over his long career.

The actor is now taking on a new role as musician, touring the country behind his country-soaked debut album, “Down in a Hole,” due out next month.

This isn’t the first time Sutherland has dabbled in the music industry.

In 2002, Mr. Sutherland, with his music partner and friend Jude Cole, began a small record label called Ironworks with the goal of recording up-and-coming musicians, never thinking that one day he himself would become one.

And so “Down in a Hole” was formed. A collection of personal tunes that Sutherland penned through the years.

In April, they released the first single “Not enough Whisky” (see video above) and soon after Sutherland and his band took to the road in support of the album,  having played 16 shows in 20 days before stopping in Buffalo on May 16 at Buffalo Iron Works.

“We’ve had an amazing time.  I’ve been really trying to manage the excitement and playing and this being such a new thing for me, trying to control that excitement and be ready to play the next show. “

Since Sutherland admits he may not be living up to the stereotypical lifestyle of a touring musician that he and his bandmates expected, he has passed that torch onto a stuffed rabbit via his Twitter account: 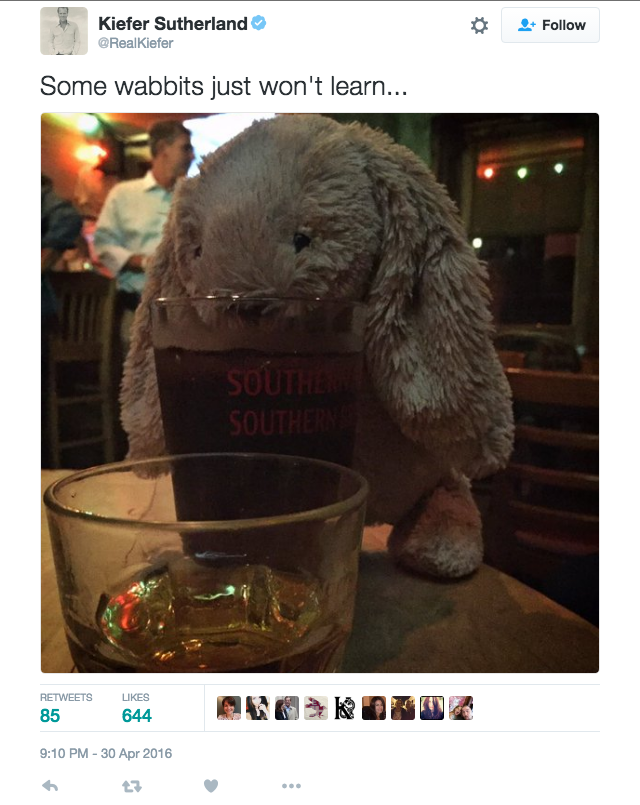 “Rockin Rabbit was a doll a young women gave me at one of the shows, so Rockin Rabbit kind of vicariously  became what we all wished a tour would be like, but we have to get up and play a show the next day so we’re taking care of ourselves better than Rockin Rabbit is”

Sutherland is the first to acknowledge the stigma that is attached to an actor hitting the road as a touring musician, but really isn’t concerned about preconceptions people might have.

“I’ve finally gotten to a point in my life where, I’m was certainly aware of the stigma of an actor playing music, but Im also at a time in my life when you’re going to say something mean, say it, I don’t give a shit, ya know?  I feel comfortable standing by what Im doing. I’ve always been interested in telling of a story. I’m very proud of the songs, Im very proud of the album” he said during a recent conference call. “I’m not trying to sell a million records and I’m not trying to sell out stadiums.  I’m wanting to give a very intimate performance to a very small audience and that’s whats been working for me”.