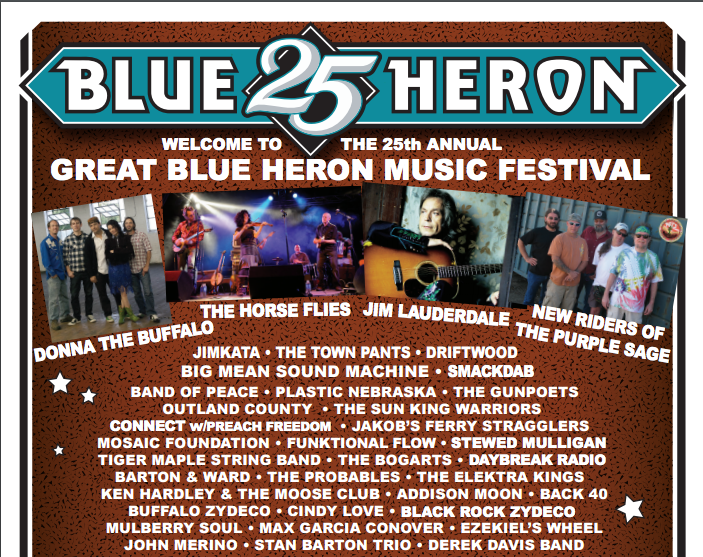 The Great Blue Heron Festival to Celebrate 25 Years of Music, Love, and Life

This weekend, thousands of happy people will hit the sprawling hills and woods of the land of The Heron, a retreat center and organic farm owned and operated by Steve and Julie Rockcastle, for the 25th annual Great Blue Heron Music Festival.

Jon Marc Johnson, of the Jamestown, NY band Smackdab, recalls his first GBH: “I remember year one with under 400 of us, on top of the world, at our own personal music festival. Rusted Root, Donna, Rasta Rafiki, and Hypnotic Clambake [were some of the bands that played]. I was in my twenties and had never been in a band. I was into the Dead and learning about how music could make a community, though.”

It is the GBH community that has kept Johnson returning every year since, and eventually saw him playing the festival with band Zeta Cauliflower in the late ‘90s, the formative years of the festival that saw it really take off. “The festival became a different beast,” said Johnson.

Since then, it has melded into a scene that “has gotten a lot bigger and a lot more family friendly,” said GBH co-founder and organizer, David Tidquist. “Early on, we added the Kid’s Tent to afford children activities and entertainment geared towards them, as well as a Workshop Tent for those who want to actively participate with the musicians. We’ve also added a Teen Tent, a Revival Tent, and The Silver Lounge, for our long time festival attendees. We truly offer something for everyone.”

There is also a swimmable pond, dubbed “The Beach,” with certified lifeguards on duty during posted hours. Special this year will be a Silver Anniversary Parade on Friday at 1 pm, with the theme, “Things That Fly.” Bring costumes and instruments, as well as props for the photo booth. You can also contribute photos to the memory wall in the “Silver Anniversary Lounge,” by the bathhouse.

Another aspect that offers something for everyone is of course, the music. One of the best things about a festival is being exposed to new music, especially when it becomes an unexpected love. This experience happens every year at GBH, as there are always the returning favorites. Combined with new additions, it is a diverse mix of genres such as Americana, roots, rock, reggae, zydeco, swing, country, old time, hip-hop, Celtic, and bluegrass. You can listen to horns, strings of all kinds, great percussion, and everything in between from these talented local, regional, and nationally touring bands. And this music, played right in the proverbial backyard of Chautauqua County does great things.

Donna the Buffalo are the only band to have returned every single year, and will be playing their standard Saturday and Sunday evening sets. There is something special about this band, beyond their danceable grooves and intelligent lyrics.
Ben Whelan, bassist for Buffalo, NY band Funktional Flow, said that of all the great music he heard at his first GBH at age 13, “the main one that really struck me the most was Donna the Buffalo. It was such a completely different style of music that I had never heard before, and I became a fan right away.”

As well as for Jon Marc Johnson, GBH also had Whelan pursuing music on another level. “My first GBH experience completely changed my life,” said Whelan. “Not only did it turn me into a complete live music enthusiast, it was the biggest stepping stone on my journey to becoming a musician. After attending a few Herons and tons of other live shows, I decided it was time to be more involved with what I truly love. At age 16, I picked up the bass guitar and gave it all I had. I fell in love and became obsessed.”

That obsession has shown the way to 6 years with Funktional Flow, who will be playing their first GBH. “I feel absolutely grateful to be apart of this years GBH! It blows my mind to even think I have the opportunity to be a part of such an amazing music festival, especially the fest that influenced me the most as a kid,” said Whelan.

In addition to playing brand new music and some of their original classics, Flow also have a few surprises up their sleeves for their Saturday evening dance tent set, which spans from 6:20 to 7:30 pm. Whelan said of who he’s excited to share the stage with that “there are too many great bands at this year’s Heron to just name one, but Funktional Flow is definitely excited to share the stage with up and coming bands like Jimkata, Big Mean Sound Machine, The Connect with Preach Freedom, and our good friends Smackdab, not to mention some serious legends like New Riders of the Purple Sage and Donna the Buffalo!”

Smackdab have played GBH every year since their inception, and in celebration of 15 years together, are expanding their annual “secret cover song” into a full “secret cover set.” They hit the main stage from 8:15-9:15 on Friday night, and will do the late night Dance Tent set on Saturday.

As always, there are just too many great acts at GBH to name-drop them all, and you will find that tickets are priced quite fairly. Day passes are also available if you can’t stay the weekend, and you could pick any day for a great time.

If perhaps you’re looking for a quieter day, many people leave early Sunday. If you’re a weekend camper, do try to stay, as Donna the Buffalo’s Sunday set contains more sit-ins than Congress. Afterwards, you will have one the best Mondays of your life.

Last, but certainly not least, Rainbow Recycling will once again be on hand as a colorful way of educating and encouraging patrons to sort their trash and recycle, and not only at the festival, but anywhere, even in their own homes. Taking care of our Earth is a special part of GBH, as the Rockcastles promote a safe, happy, healthy, organic, sustainable environment for all.

“What started as an idea for a day with Donna The Buffalo has turned into so much more. It is really gratifying that it has grown to mean so much to so many,” said Dave Tidquist, a sentiment that couldn’t be more suitable.

Jon Marc Johnson may speak for us all, as he articulated why it means so much:

“The Great Blue Heron isn’t the music, or the vendors, or even the location. It’s the people. It’s more than a music festival. It’s a reunion, a group of people that believe in their hearts that we can have a better way if we just come together, listen to the music, and smile for a minute or two. I’m proud to be part of this legacy.”

So are we, and on behalf of the Heron family, we hope you can join us for what promises to be a special milestone celebration. 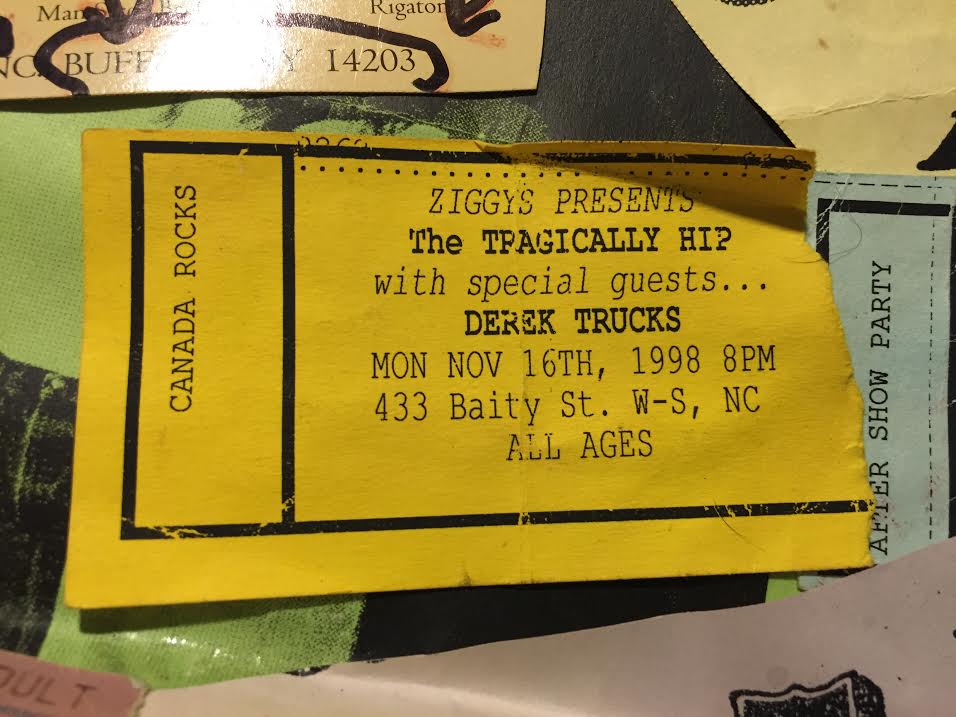