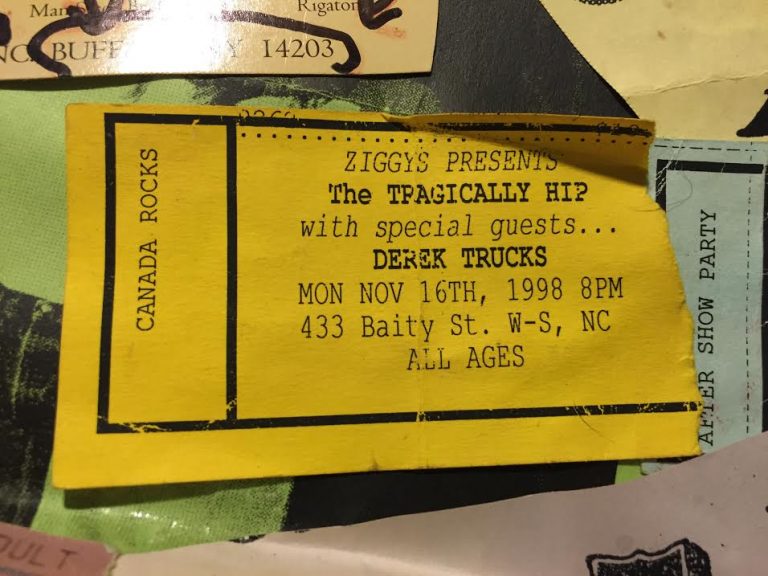 Like most people from Buffalo in the late 90’s, I made the move to find work in Greensboro, North Carolina.

Within the first few days after settling in, we found ourselves in a small intimate bar off the beaten path in Winston Salem, N.C. called Ziggy’s, where G-Love (without the Sauce) was playing a solo show to an extremely small bar crowd.

The now defunct venue close to Wake Forest University was known to host major up and coming acts over the years like Phish, Dave Matthews Band and The Black Crowe’s (to name a few). Bands that you can now only see at major venues like arenas and amphitheaters.

Needless to say we quickly fell in love with Ziggy’s.  Back in 1998, if the venue held 500 people that would be pushing it.  Here are a few really bad pics (hey… it was 1998) to give you an idea of how intimate Ziggy’s really was back then:

Over my three years there, we were fortunate to see some amazing show’s at this small intimate venue, including a few bands that were very near and dear to this Buffalo born transplant. One of those bands was the Tragically Hip. (Moe. happened to also be a regular at Ziggy’s) 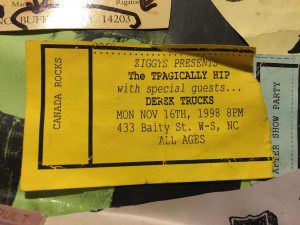 Like most Buffalonians, my previous experiences seeing the Tragically Hip to this point were at big venues around the Northeast and Canada. In fact, the previous hip show I attended before this was back in 1996 at Marine Midland Arena (a sold out 18,000+).

So imagine my excitement on November 16th 1998, when my friend Stu and I found ourselves pressed up against the stage, an arms length from Gord Downie, being treated to a show of epic proportions.

You only have to listen to the first few minutes of the opening song Grace, Too to get a sense of how special this show was to those in attendence.

Screams rang out throughout the show whenever a mention of Toronto, Buffalo and other familiar phrases to every transplant in the room filled the air.  There was even a reciting of the Canadian national anthem before the encore (unfortunately not recorded).

As I sit here and reflect on the awful news of Gord’s teminal diagnosis and the 40+ Tragically Hip shows I’ve been lucky to experience over the years, all I can do is thank Gord for years of memories, entertainment, poetry and philosophy only he could give.

I will always cherish how special this show was for me and the hundreds of people who were lucky to get in the door that night.

It was a special night indeed.