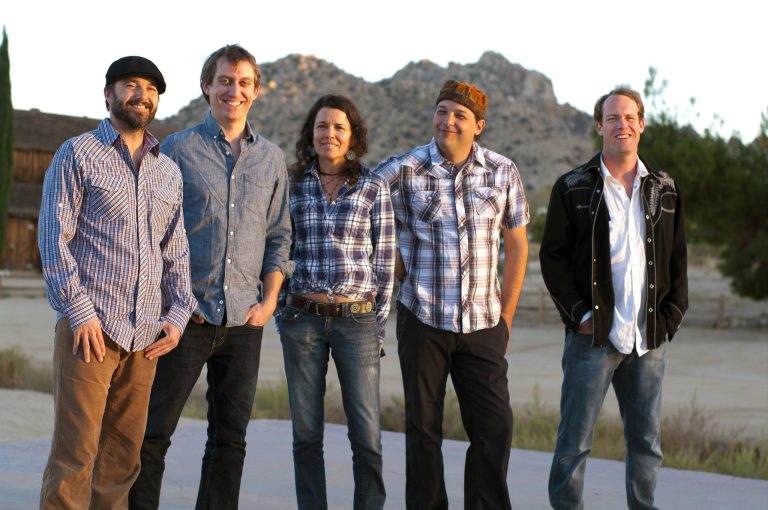 Jeb Puryear (vocals, electric guitar) and Tara Nevins (vocals, guitar, fiddle, accordion, scrub board); David McCracken (Hammond organ, Honer clavinet & piano); Kyle Spark (bass); and Mark Raudabaugh (drums) are Americana band Donna the Buffalo, a group that has been rocking crowds with their grassy grooves for nearly 30 years. This crew makes playing intricate music appear effortless, and their feel-good, constructive vibe infectiously translates to the frolicking audience. Even if you typically don’t dance, you will not remain still for long.

Donna the Buffalo show no signs of slowing down any time soon. With a new bus for a busy touring calendar that includes festival stops and a weeklong cruise with Sounds of the Sea, and new music in the works, both the band and their loyal fans (aka The Herd) have a lot to anticipate in 2017. Ms. Nevins was kind enough to share some time from her eventful schedule to fill us in on some topics we’ve been curious about, such as:

The new bus and the awesome fans who helped them achieve their goal, raising over 85,000 in 3 weeks:

“The new bus is great. We’ve taken it on two big trips now and we’re working out the kinks, and we love it. We’re very fortunate and very grateful that our fans helped us out on a GoFundMe on Facebook. We’re just still in shock. We can’t believe it and it’s a beautiful bus….It’s really an eye-opener, a surprise, and it’s very encouraging. We’ve been doing this a long time, and sometimes you’re out there on the road and you’re seeing pavement, and you’re playing gigs, and you’re working hard. I mean, it’s hard work, and sometimes it’s nice to get a shot in the arm of encouragement and appreciation. There were so many people that wanted us to be able to continue doing what we’re doing….It makes you feel like you’ve given something to these people and you’re receiving back, and it’s letting you know that it’s all very appreciated and it’s a mutual appreciation. People appreciate us and we appreciate people back. This just made us feel very loved and encouraged and excited, you know, and made us feel like we’re not just out there pissing in the wind, as they say.”

“We started it, but we haven’t gone in the studio yet. We’ve been so busy. Not only gigging, but also working the GoFundMe actually took up a lot of time, and then we had the bus slightly remodeled on the inside…. Initially two people before us owned it, one of them was Wynonna Judd, and she had it set up as a star coach, which is just a huge bedroom in the back with vanity mirrors, and all that kind of stuff, a shower and all the of stuff. We needed your classic entertainer coach, which is set up with 12 bunks and some room in the back, and so we had a carpenter come in and remodel it for us. He did a beautiful job and that took a lot of time too, and then the holidays came. We just got back from Jamaica [Dark Star’s Jamaican Jam in the Sand V] and I did the logistics and that took up so much of my time, organizing that for everyone, and we’ve been gigging a lot, and everyone’s been so hectic and so busy we haven’t been back in the studio yet, but we will!

The writing: how political?

“Jeb and I are just writing privately at the moment…. Everything’s crazy right now with this election and everything that’s happened in the past week, we’re kind of reeling from it. It will remain to be seen, what comes out of us, whether we go in a political direction or really just steer clear and get in a more personal direction; that will remain to be seen. Right now, our heads are spinning, and sometimes when you’re creating and writing, and you’re head’s spinning, you kind of have to let your head cool down a little bit!

The finale sit-in sets: how often do you get to do them, because they are remarkable?

“…We’re asked to do that a lot. At the Grassroots Festivals, there’s four of them, we do that at every one. On Sunday night, we do the finale set and have bands come up. We do them at Great Blue Heron Festival, at Magnolia Fest and Spring Fest in Live Oak, FL. we’ll do a Sunday finale set….We do it as an actual tradition at several festivals now.”

I don’t think I speak for only myself when I say that I am definitely looking forward to summer and catching one of those finale sets during at least one of the many cool festivals Donna the Buffalo is scheduled to play. They are also performing some of their new music, so be sure to keep an eye out for that too. Check out their website for a full listing of tour dates.

Moreover, we love when they come to Buffalo as well! Do not sleep on this one; they tend to sell out Buffalo shows. Tickets are $22 ADV/$27 DOS and can be purchased here. Tickets are also available at the Iron Works Box Office & Terrapin Station on Hertel Ave.